New siding for the Titanic

NEWSPAPER publishers, navigating through fields of icebergs, have ordered up vinyl siding to re-clad their hulls. Why do they think this will help? They are fussing with surface details when they need a new course and a whole new vessel.

The obvious example is the Wall Street Journal, which took Joe Dizney and Mario Garcia’s superb design and covered it with cheap polyester upholstery. (Whatever you think of Rupert Murdoch, you don’t associate him with good taste.)

This image came to mind on a recent trip from Singapore. Transferring at Narita, I got on a United (legacy Continental) plane to Houston, and was offered a copy of the Houston Chronicle. My stomach turned when I saw that they had thrown out the typography I’d helped develop less than 10 years ago. The centerpiece of that effort was Houston, a strong revival of the Jenson type used in American newspapers in the early 20th century.  (These Jensons were based on Morris’s Golden Type, which was based in turn, he thought, on the first Roman typeface cut by Nicholas Jenson in 1470.)

The work was done by Christian Schwartz, originally commissioned to do a headline font for the Chronicle. He volunteered to do a body type in the same style, which I doubted would work.  The text face has some reference to British Monotype’s version of Jenson, Italian Old Style—not to be confused with the Goudy (Lanston Monotype) font by the same name. I expect this type was used by newspapers for small display, but not for body type.

Stop me if you’ve heard this story before, but we always test newspaper text fonts by running a press test, showing columns of alternate typefaces, with variations of leading, tracking and size. I had expected that Ionic, which I had gotten the Font Bureau to revive for the Baltimore Sun and the Los Angeles Times, would be the best on press, and the best for the design. But, by golly, Christian’s Jenson won, and we were able to convince the paper to add his text styles. 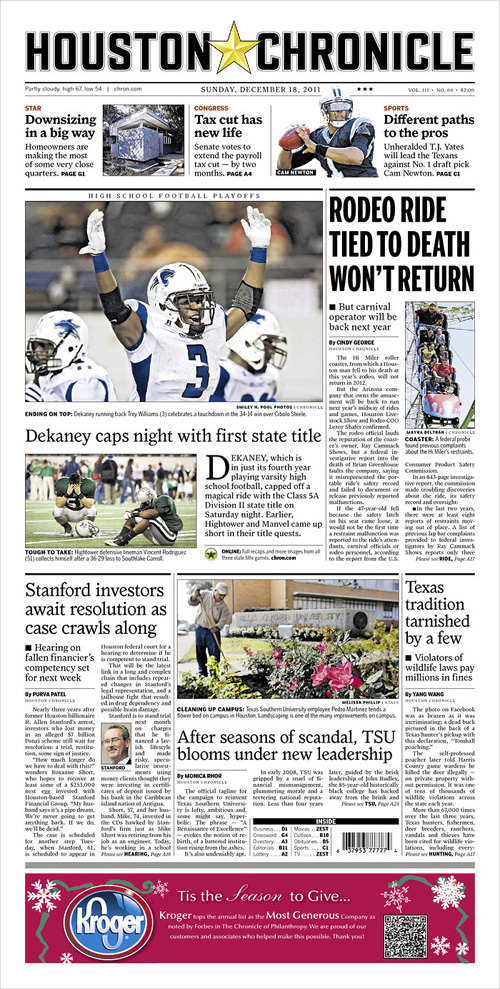 The Chronicle, as it looked in the first major redesign in 20 years. The font Bureau site has a little gallery of typography, including Houston and Benton Gothic.

Now, it’s gone. The Houston Chronicle has subbed Farnham, another Christian Schwartz type, for its custom font, and made some other changes in the design, in effect masking the masonry walls with some nice masonite paneling. I am reminded of visiting J.J. Black’s Mascho house, one of his best-detailed buildings in Midland. A previous owner had painted over not only mahogany ceiling in the dining room, but ledge stone walls around the fireplace, I guess to make it brighter. Well, the Chronicle doesn’t look any brighter, and maybe not that much different for most readers. (Indeed, no one blogged on the change, and I can’t find any reference with a quick Google search.)  But they’ve lost the quality and the reasoning behind the design I directed, which tied it to both the newspaper’s past and the big newspapers of the past, some of them Hearst newspapers, which bought the Chronicle in 1987. 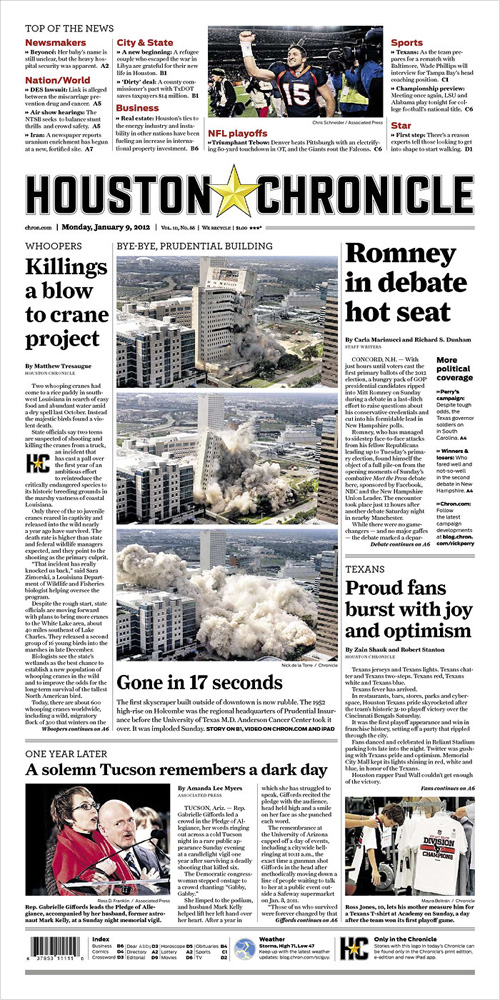 The revised design, as seen on today’s front page. (Via Newseum.)

Ironically, I’d been suggesting to Jeff Cohen, the editor, that it was time to make some changes, since the paper had remained the same for too long.

Eduardo Danilo, my business partner at Danilo Black, was traveling with me, and suggested that this change may have something to do with the editorial hub that Hearst has set up in Houston. Perhaps they purposefully sprayed over the paper with a generic coating, so that pages could be used in San Antonio and elsewhere.

Well there are ways of doing this without throwing away the design equity of the paper. Danilo showed how it could be done, 15 years ago at El Norte, Reforma and El Mural, which are part of the Junco newspaper group in Mexico. The dailies shared pages, but switched the fonts so each would have a local style. This was accomplished by getting the Font Bureau to match the widths on their text fonts so that line endings, and layouts, would be the same in each paper.

I won’t go into the other wrong choices the Chronicle has made with this move. (I’ve written about the value of design equity before.) Or the previous trashing of the web design, which does not seemed to have helped the revenue side. Many great designs have been thoughtlessly discarded, and with it some of the connection to readers and advertisers. Some publishers don’t get the importance of refining and restating a brand rather than changing it.

Some do. The New York Times, Rolling Stone, to name two I’ve worked on, have extended their vocabulary over the years, but they still use the same language.

Not always the case. Joe Hutchinson’s and my design for the Los Angeles Times has survived the intervening years with most its design equity intact, despite the depredations of Sam Zell. That wannabe mogul tried to destroy the design of all the Tribune papers, and succeeded in Chicago, Baltimore and Ft. Lauderdale, where editors ordered up the cheap vinyl siding, or just went at it with sledge hammers. In L.A., the designers stood up to Zell, who has now been placed on an iceberg in Lake Michigan. (Or should have been.)

There are other ways to approach the decline of the U.S. newspaper business, other than panic. I saw an example last week in Singapore, which of course is a different market entirely, but still worth learning from. I had gone to Singapore to help Danilo on an exciting design project for Today, the free paper there. We worked with a smart, energetic—and small—team, lead by editor Walter Fernandez. In the ten years since it was started by the TV group, MediaCorp, this daily has taken a big bite out of the market from the establishment paper, The Straits Times, which Danilo Black designed in the 90s, but which since has also applied two layers of vinyl siding.

Today is a lively paper, with a mid-day update edition that office workers queue for. There’s a complete web site, and of course an iPad app. Yet, the newsroom headcount is under 100. And they’re already thinking, “digital first.” They’re breaking the stories on the web, and then adding texture and reporting during the day. The print edition features analysis and opinion, the theory being that everyone already has the news. What readers are looking for in print, is the analysis, the background, the critique, the forecast—the narrative. With the energy of this project—no giant conference room meetings, more work than talk—I am believe that we can put the kind of design momentum that will build equity, and a style that moves with the constant change in Singapore.

A new, small, fast, multi-platform boat can get up on plane and cruise around the gathering icebergs, while the giant, liners, despite their cosmetic resuracing, slowly get out their lifeboats. Wave as we pass, since we may not see them again.

And, hey, if you want a strong and elegant news text face that no big paper is using, I can recommend one.

Alert reader Terry DeWitt has nailed it. The Chronicle is “hubbing” (as Charles Apple puts it) with the other Hearst Chronicle, the one in San Francisco. Here’s today’s front, also via Newseum. 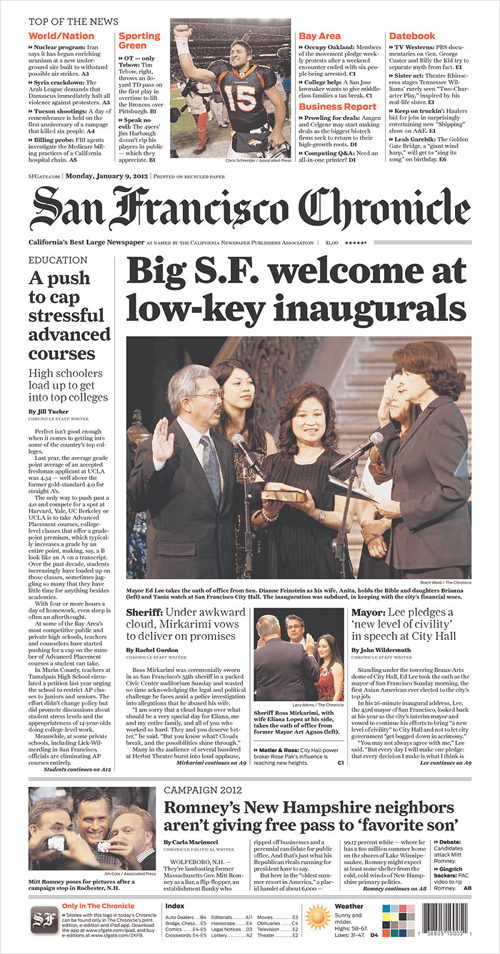 San Antonio has yet to switch over to this style, but it may yet. Both the Express-News and the San Francisco Chronicle have wandered away from the work done by Jeff Heinke and Nanette Bisher, who both tried to build on the DNA of their papers. The SF paper had a wonderful version of the typeface Electra to work with—drawn in house (!) by Jim Parkinson. In the last few years the papers lost their editors, their art directors, and their way. There is none of the great old San Francisco Chronicle in this generic design, the days of Scott Newhall and Herb Caen. (Never mind the actual Hearst flagship, the Examiner, which was sold down the river—and twice since).

Why Hearst thinks that Chronicle readers are the same in Houston and San Francisco, is beyond me. You go there, and immediately you see that the cities are profoundly different, geographically, demographically and psycho-graphically. The true owners of a newspaper are the readers. They pay for it every day, and/or look at the ads. And Houstonians are immensely proud of their city, and understand its identity. More so in San Francisco, if only because it’s older.

The only way you could appeal to citizens of both Houston and San Francisco with the same typography is by doing something has has nothing of the soul of either place. This is what they got.

Next entry: Sites and apps, chutes and ladders

Previous entry: A crystal ball for 2012