WHEN we started Treesaver two years ago, I suppose it was natural for me to think of it as a step in the evolution of my publication design work. Treesaver is a publication platform, and I had been designing big magazines and newspapers since the 70s. The genesis of the idea came during a design assignment for Microsoft—The New York Times Reader. That’s where I first met the great Filipe Fortes, and after MS killed the project it was Filipe who suggested that “we” could in HTML.

As Filipe wrote the code, I took the idea around to my friends and acquaintances in magazine and newspaper publishing, to all the big groups—Hearst, Time, and The Washington Post Co. I remember one big presentation at the Condé Nast building on Times Square for about 30 editors and designers. Among them was Fred Woodward and David Remnick. The meeting was set up by David Carey, then publisher of Portfolio, who I knew from a tablet PC project for the New Yorker.

There were a number of advocates of Treesaver there, including a group from the Wired.com web site, but the print folks won out and they decided to go with the Adobe Publishing Suite, which converts an issue of, say, Vanity Fair, to an iPad app that weighs half a gig. (How did that work out?)

That story was repeated at Time and Hearst. The web folks were generally interested, but the print guys kept thinking of digital publishing as something like the print product—created with the same workflow. So they went with Adobe (with or without Woodwing) for the iPad. Yet there was no multi-platform strategy, just separate strategies for different targets—the web, mobile and tablets.

There were similar meetings at other big publications. Some ordered up a “proof-of-concept” editions. Sporting News, part of Advance, gave us a major commission, the Treesaver hybrid iPad app that launched a year ago. Now it has several hundred thousand regular users and big advertisers. The un-promoted web version of the app can be shared by Pad readers—to people who don’t have iPads. This publication is published daily with a 5:00 pm update. In a heavy sports season, with all the team pages that a reader can include in a personalized edition, Sporting News can have 1,500 iPad pages. And all this is done without a production staff. Treesaver does the layout.

So while I was thinking that Treesaver was a success, it wasn’t really catching on quickly with my traditional clients. Not that they had any better ideas, the big publishers just weren’t ready to commit to a multi-platform strategy. 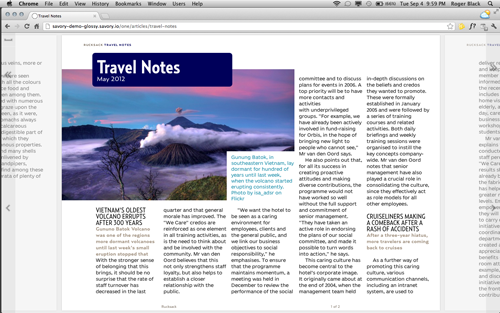 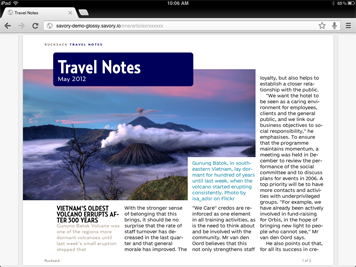 Savory launched with two design themes, one for magazines and one for news publications. The department grid from the magazine theme “Glossy” is seen (at about one-third size) on a MacBook Air, an iPad and an Android phone, the Samsung Galaxy Nexus.

Then, late last year we got a call from Milan. A small server-side developer called ZephirWorks had become fascinated with Treesaver. They integrated the open-source code and grids into a Ruby on Rails content management system, Locomotive. This made Treesaver feasible for small publishers—or for experiments at the bigger companies without a big commitment of resources.

Andrea Campi and Andrea Granata, the principals of ZephirWorks, had complete command of the server side of the effort. They were ready to set up a hosting service, like a grown-up version of WordPress. They asked if we could help with the front end, with the design of the templates and the web site. They wanted to call the start-up Savory.

The more I talked to the Andreas, the more I liked the idea. I missed them when they first came to New York, but Scott Kellum, the first designer-developer at Treesaver, met them and was enthusiastic. So we set up a joint-venture on a virtual handshake.

Of course we thought it would take no more than a couple of months to build Savory, but it took eight. This is a true bootstrap. Neither partner spent a lot of money—just time. And last week Savory launched.

The theme designs started with grids from Scott, tweaked by Mike Mitra and Kevin Muncie. Mario Valencia built the web site (conventional at launch, but soon full responsive). If you don’t like the design, you have to blame me.

The Milan team built out the CMS beautifully, with good on-screen cues. And they wrote user guides—in English—that really helpful. They designed the server structure and the e-commerce part. At launch, the site is based in Europe, with transactions in Euros. This fall, the U.S. server should be up and the dollar-denominated payments enabled.

And so Treesaver is making a pivot. While I’m still talking to my friends in the established press about big Treesaver editions (two meetings this week!), Savory is the entry-level platform that people have been waiting for. The first to contact Savory are editors and publishers outside the big groups or refugees form them; weekly and alternative newspapers; what I call the digital-onlies; and non-profits.

These publishers and wannabes are the future of publications. They “get” the social media, crowd sourcing, iterative live content, and the idea that readers increasingly want to participate in a conversation rather than just sit there and read.

Savory’s feature set was kept pretty lean to get through the launch. In the pipeline are variations on the themes, new features, and new designs. Check it out, and let me know what you think of what we’ve done, and what you want to see.

Next entry: An app, or not