The new model
for digital ads

ADVERTISING has been ruining the design of content web sites for nearly 20 years now. Crazy clutter, disorienting push-downs, annoying forced page-views and scary teeth-whitening ads combine to make an repelling UI brew. It’s all a result of the unlimited inventory of web pages driving prices to the bottom—moving publishers to take anything that comes in.

Can we stop the ugliness from creeping onto the iPad? Of course publishers welcome an increase in ads, but readers can see that as clutter. Content apps like the Los Angeles Times have started copying the useless banners. (Think, “Ringtones!”) Polished news apps like BBC or the Washington Post Politics settle for a single ad position: a banner across the bottom of every page. That’s easier on readers than disconcerting interstitials and unstopable pre-rolls on the videos.

For ad layout, the big print magazines came from the other direction—from print. Zinio-style “digital replicas” were easy for publishers, and the ABC let them include digital circulation in their totals. The user interface was easy; nobody ever had to read an info-graphic to learn how to operate a magazine. Zinio followed the process onto the tablet, and offered the first magazine newsstand on the iPad.

So far so good. Swipe to turn pages, like an e-reader, and when an ad comes along, take a look, and if you aren’t interested, keep swiping.

Titles from Time Inc. and Condé Nast upgraded the magazine-on-the-tablet approach, using Adobe’s Digital Publishing Suite. Whatever you think about the download size and readability issues (David E. Wheeler convincingly condemned those last spring), nevertheless the the ads work well as print ads. Or no worse.

A simpler, cleaner extrusion of a print magazine is the app for The Economist, which is fast to download, has clear, resizable body type, and advances through pages like a Kindle. Pages work in portrait or landscape, with no vertical scrolling except for the balky contents page). Ads are presented as simple full screens—no partials allowed. 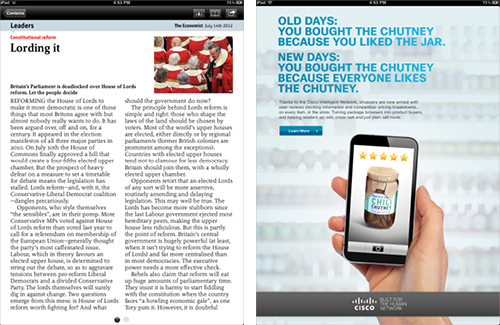  
Two pages from this week’s Economist iPad App. Of course, it’s not a spread.

Publishers and ad agencies wanted more on the tablet, if only so they could charge more. They missed the “interactivity” of web ads, and were afraid that ads needed to be more assertive to be effective. Ads appeared in places such as The Wall Street Journal app that interrupted the reading experience. Like pop-ads on the web, a simple swipe wouldn’t advance them, you had to find that “Back” button.

Over the last six months, we’ve started seeing a paradigm that could be come the winning standard. The ads are full-page ads that work like those in The Economist. You just swipe along until you get to a full-screen ad, and then you can stop or keep going.

WSJ has more complicated navigation, moving up, down and sideways, but the simple full pages ad are working.

An HP ad right after a WSJ section front. It links to the mobile version of the HP site.

TheSporting News, which runs on Treesaver, has pushed the idea another step. The publisher offered sponsorship deals to advertisers such as Toyota and AT&T. Sponsors get prime positions, including “inside covers,” bumpers between big stories, a sprinkling of partial-page ads to provide immediate editorial adjacency, and branded features like scoreboards 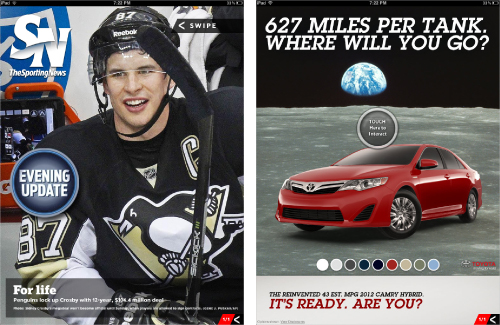 The cover of The Sporting News app, is followed by an interactive “inside cover ad.”

Now with with 250,000 downloads, the daily magazine has plenty of positions with as many as 1,500 pages a day (if a reader orders up coverage of every league and every team). But they carefully limit the sponsorship avails so that readers are sure to see the ads. The result is a scalable model that may actually turn digital publishing into profitable business. 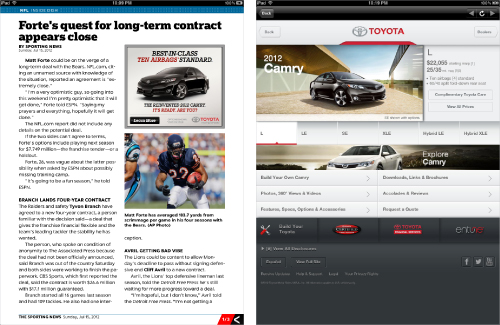 An inside page, with a spot for Toyota that links to an iPad-friendly web page. Note the big honking “Back” button.

The key is that sponsors can do more than they can in print. Readers can click buttons that changed the colors of a new car without turning pages. In a recent issue of Huffington, Toyota ran a game. I didn’t bother playing it, but it was a cheerful addition to the magazine, which is one of the best converted print magazines, except that they don’t bother to print it first.

At the simplest level, advertisers just include a big button that links to an iPad-friendly web page.

As the model gets traction, sponsors are building mini apps purposefully designed for the iPad—or are fully responsive. For example, the Toyota ads in The Sporting News iPad app look fine on phones—and laptops. (You can see the publication outside of the iPad, here.)

This is the digital equivalent of bind-in ad sections. The payoff is a shopping cart at the end of the insert. 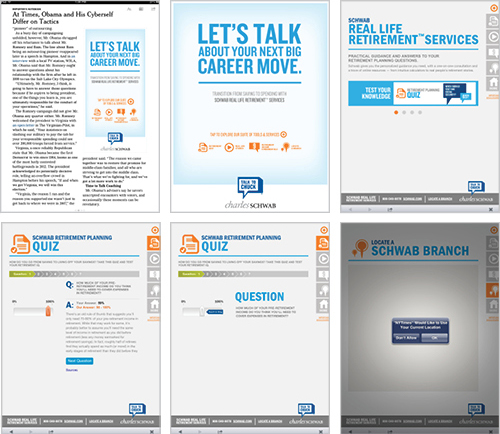 This friendly mini app for Charles Schwab, can lead a reader right into a branch office.

There are some rough spots in getting sponsorship packages to work. The Times, suffers from a bad combination of too few templates and too few ads. The result are some awkward pages. For example, you often see a story where a single picture is jammed up above a house ad you’ve seen a dozen times before—today. This layout in the Times ended with a partial text page. With no premium on space, it would have been easy to enlarge the photo on the second page—and kill one of the house ads. When you look at the story overall, you wonder why they can’t write some rules into the code that (1) doesn’t crowd the art, and (2) doesn’t allow filler ads to be endless repeated.

Often the house ads run above the text—which in the old days was against the law.

I can’t complain too loudly about this situation, since a very similar page shows up in The Sporting News, and for the same reason—not enough templates, too few rules. Above, you may have noted a Toyota spot in SN that is placed above an editorial picture and text. This is just wrong.

But these details can be worked out. The important thing is to see sponsorship emerging in a number of iPad publications. The strategy avoids the unreadable jumble of the content web and create new opportunities for advertisers to connect with customers.Scarcity is key. But the big win is that shopping cart at the end of the mini app.

We have a new chance to make digital advertising work for readers—as well as publishers and advertisers. Let’s not blow it this time!