The web is not dead

THE Facebook IPO has stirred up old-guard of the web like nothing since Microsoft’s war on Netscape. They hate the Roach Motel principle of Facebook data—you check in, but you never check out. But the real alarm is over the challenge to the open web. Facebook is a walled garden, and its scale threatens to suck in the digital world like a black hole. I mean, it’s not searchable!

Robert Scoble, the blogger and technology spotter, says he has already gave up up on this fight. In an extraordinarily bitter post, he says:

The time for a major fight was four years ago. I understood then what was at stake. Today? It’s too late. My wife is a great example of why: she’s addicted to Facebook and Zynga and her iPhone apps.

That brings in the second cause for alarm, the growth of the hegemenous, vertically integrated ecosystem. These include hardware, software, content, distribution and marketing—like Apple’s iPhone/iOS/iPad/iTunes/AppStore/apple.com or Amazon’s Kindle/Amazon-Android-fork/KindleNewsstand/amazon.com. Now Google is expected to push into audio and TV hardware to supplement the Nexus S phone in their own ecosystem of Android/Chrome/AndroidMarket/google.com.

A piece in The New York Times by David Streitfeld, sets the stage.

In the old days, you listened to music on your iPod while exercising. During an idle moment at the office you might use Google on your Microsoft Windows PC to search for the latest celebrity implosion. Maybe you would post an update on Facebook. After dinner, you could watch a DVD from Netflix or sink into a new page-turner that had arrived that day from Amazon. That vision, where every company and every device had its separate role, is so 2011.

Dave Winer, another major blogger with a coding background, says:

It pleases the money folk to think that the wild and crazy and unregulated world of the web is no longer threatening them. That users are happy to live in a highly regulated, Disneyfied app space, without all that messy freedom.  I’ll stay with the web.

As we move into these self-contained black holes, the assumption (which drives the market cap for Facebook) is that we will stay there, and some will. They’ll get their content via Facebook, and won’t have to address the wild web directly. It’s like the good old days of AOL, before the messy web. Or, remember Apple’s eWorld, with the geographical UI home page with its little red mail truck that would bring you your e-mail? Ah, the world was safe then.

Now, Facebook is not so much a walled garden as a giant amusement park filled with all your “friends.” What happens when someone somewhere else invents a new ride? Or you just want to leave Disney and go to the beach. 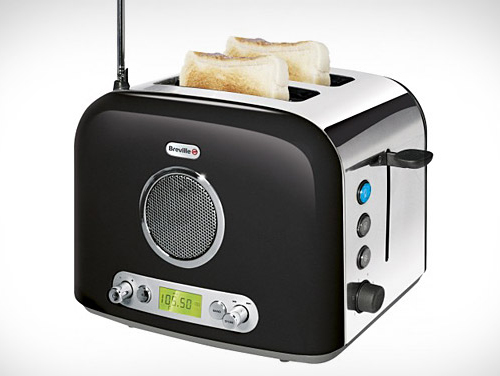 This 2010 toaster radio was not a success. (You can find a Kenwood retro version on E-bay.)

Ultimately no ecosystem can solve all a user’s digital needs. It’s like buying an appliance that tries to do more than one thing. A clock radio is one thing, but do we need a toaster-radio-MP3 player? Since the tasks are separate, it’s easier to buy separate appliances. Get separate updates. And, hey, there’s no bagel setting.

Even if we “like” the Facebook social network, we might still use Twitter and Google+. This is why AOL and Yahoo declined. They were trying so hard to do so much, they couldn’t keep up with change. Or the fact that people may not want to stay on the farm.

I am well-stuck in the Apple ecosystem, with iPhone, iPad and Mac, but there are limits. Sometimes, out of sheer pigheadedness I carry an Android phone. I love Google Maps app there. It’s much smoother within that ecosystem. I don’t use Safari on the Mac, but Chrome. I don’t use iBooks on the iPad, but the Kindle iOS app. For people like me, Amazon has made Kindle apps for every platform, including the its own Kindle and the Kindle Fire. Some folks who own a Kindle may find themselves occasionally reading their book on a PC. Others may stay within the Amazon ecosystem all the time, but how many? Amazon knows they have to reach their customer where they are. And the web site that fuels their business is still . . . a web site.

This is a major truth. However large the ecosystems become, they all run on the Internet. And HTML has become the visual layer of all digital advices, including the iPhone and the iPad. And, after all, Facebook is a web site, and so is Google+. If you want to develop for these big platforms, HTML remains the lengua franca. The more you can do within HTML and CSS, the easier it is to port to the other platforms.

My partners and I are going to continue developing Ready-Media templates and Treesaver grids in HTML—for the web. And if we wrap them into a hybrid app, that’s only for as long as people want them that way.

John Battelle, blogger and entrepreneur of Industry Standard fame, hasn’t given up, but he’s fearful of losing the web’s own open ecosystem:

If we lose the web, well, we lose more than funny cat videos and occasionally brilliant blog posts. We lose a commons, an ecosystem, a ‘tangled bank’ where serendipity, dirt, and iterative trial and error drive open innovation.

Battelle says that “it’s become clear that there are more than business model issues stifling the growth of the open web, including engineering (“too hard to create super-great experiences on the open web”); mobility (“The PC-based HTML web . . . has no eyes (camera), no ears (audio input), no sense of place (GPS); and experience (“The open web is full of spam, shady operators, and blatant falsehoods. . . In the curated gardens of places like Apple and Facebook, the weeds are kept to a minimum, and the user experience is just…better).”

This is a great explanation of why the open web left room for the walled gardens and all the mobile apps. Basically, the web has always looked terrible and was hard to use. It’s hard for the developers to understand how bad it was, because it was their home, the place where they started. And the incursion of the ecosystems is like a home invasion for them.

Dave Winer explains that his commitment to the web came early. “It meant everything to me, because now there was no Apple in my way telling me I couldn’t make programming tools because that’s something they had an exclusive on. I was able to make web content tools, and evolve them, and get them to users, and learn from our experiences, without the supervision of any corporate guys, who see our communities as nothing more than a business model.”

The angst is increased by all-too human expectation that the world must fit into a pattern, that you can have the web or Facebook. But not both. Of course it’s not that simple. Battelle’s reaction and that of Scoble are based on an absolutist view that the web should be everything. But, it never was. In a comment following Battelle’s post a John Doey (which might be a pseudonym, although there are 13 John Doeys on LinkedIn) points out that “The Internet is bigger than the Web, and always has been.”

Doey objects to “the extremist position that either everything is on the Web or the Web is dead.” He says, The Web is the common platform, like outdoors, the public space. We still have private platforms, like indoors, like a private club.”

“The Web provides a common platform but it is not the only platform, “ he says. “Some stuff simply can’t run on the Web. Some stuff you don’t want to run on the Web. . .  The Internet is bigger than the Web and always has been.”

As, an aside, it is wonderful to read comments on these blogger’s sites that are just as cogent and relevant the posts that triggered them.

Back at Scobleizer, commenter John Proffitt, adds a similar note.

AOL was a threat to the Internet, too—the first major walled garden. And we all know how that turned out. Facebook, Google+, Twitter —these are trends that will pass in time. Things will go private, public, private, public… again and again. The key is to pick your tools so they handle what it is you’re trying to do with a mix of trade-offs that you find acceptable. That’s it.

Google has been dominant in search for 10+ years, but it won’t always be so. Their recent mis-steps are a replay of Microsoft’s mistakes. They’re stumbling. They’re getting disrupted. That’s life. What they’re doing now with Google+ and modifications to search and Android are attempts to fend off the disruptors, or what you would call the closed web purveyors. They’re just trying to create a “better” closed web—one that they control. Might work for a while. But not forever.

But as Kathy Pitts concludes in a comment on Scobleizer, “Nobody ever wins. It is just a constant increase of options.”

Not long ago a friend said he couldn’t get used to using a Treesaver site on a laptop, but liked it on an iPad. He said, “I’m not ready for app-like behavior, like paging and adaptive layout, on a web site.” Well, that’s because so few web sites have tried to break out of the conventions, some of them really ugly, that have become standard over the last 17 years.

As content folks, if we want the web, we just have to build web sites that work well. They have to be beautiful. They have to adapt smoothly to different devices. The new browsers (like IE10 and Chrome for Android) can show off the work very nicely.

Our innovation can extend the web frontier. It’s possible that the ecosystems, like the railroad trusts of the 19th century, will come in and idiots will shoot all the buffalo, and the frontier will be closed. But this is a virtual frontier. Instead of fearing Google and Apple and Amazon, we can use them. They can link to our narrative content, and our wild west. While they’re aggregating and syndicating content in a massive way, we can provide the individual branding, the rich personality, and the innovative design. Out here on the open web.

Next entry: Adaptive design: It’s all about to happen