There is more than one way to skin an app

SPORTING News launches today a daily digital edition that doesn’t take a major league of production artists and coders to produce. Introduced in time for the football season, The Sporting News is built on the Treesaver® HTML5 framework. In its first configuration, it’s running in an iPad app. And so it’s available in Apple’s App Store.

Taking advantage of Treesaver’s algorithmic design, TSN staffers can focus on the content, which is extensive. This is a venerable publication, with a big biweekly circulation and a major web site. Sports fans have used it over the years to get national sports statistics in real detail. Before the days of the Internet, they were one of the only national source for this “agate.”

To respond to the iPad era, Sporting News had augmented their robust web site with a daily app produced on the Zinio platform—that is, using Adobe InDesign as the authoring tool. Wired and Vanity Fair start with InDesign and publish on Adobe’s own platform. (These Condé Nast magazine are owned by the same publishing giant as Sporting News, Advance.)

These print-based methods essentially start with pictures of print magazine pages. The workflow may be good for print,  but it takes many more hands to make an app this way. And those Sporting News did not just repurpose their print magazine. They went daily, 30 times the frequency of their Condé Nast cousins. Now these guys are smart and lean, but it was a lot of churning work.

Today, with Treesaver, Sporting News introduces a new iPad app. Staffers that were working into the night laying out pages in portrait view (for landscape, they showed two pages in a spread), can spend their time choosing great covers, and more inside photos. Fresh attention is be put on video . . . and the agate. 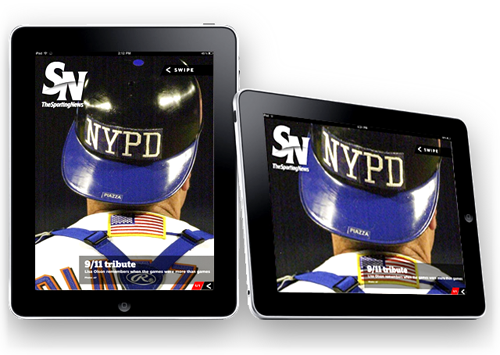 The Sporting News, a new iPad app built on the Treesaver platform, is now available at Apple’s App Store.

No one has unlimited resources anymore, and the question is where do you deploy your staff to get the best effect with readers, and advertisers. While we all like the look of an intricate, artisanal magazine like Wired, in a daily, the live content is what counts, and that includes visual content.

Treesaver uses a series of rules, algorithms, to design a publication. They are informed by the same sense of esthetics and typography that a designer uses one page at a time. But Treesaver does the layout on the fly, for each screen size.

Treesaver is an open-source Javascript framework built on web standards. So this app is a light slipper that fits the Treesaver’s HTML5 code like Cinderella’s foot. The download is under 10MB. And download time—well, judge for yourself.

The web version follows soon. It will work on any device that has a browser. Content in Treesaver divides into pages with simple, intuitive navigation. Layouts automatically adjust to fit any size screen—from smartphone to tablet to notebook to desktop.

The cool thing is that the web sites will be fed from exactly the same HTML/CSS/Javascript as the iPad app. Not only do the designers get to work on the stuff that matters to readers, so do the developers.  I’m not saying that the publication requires no staffing; there are editors, photo editors and advertising and marketing folks with specific responsibilities for the edition. But the resources commitment is rational, and scalable.

And this is no e-pub book. It’s a big app, filled with the stuff you’ve come to expect on the iPad. It brings Treesaver’s feature set to a new level, including:

▪ Updated Twitter feed. And, when the web version is hooked up, article sharing.

▪ Personalization. You can add teams and get additional coverage and data (automatically, if you log-in with Facebook).  And you can change the order of the sections—to put, say, NASCAR in the back where it belongs.

▪ Aggregation layer. Each section is accompanied by a complete set of recommended links—even to the competition! Built with PublishThis.

Check it out, and let me know what you think. I, of course, did little more on this project than wave my arms. The heavy-lifting was done by Filipe Fortes, the inventor of Treesaver, who added and debugged all of these features. Scott Kellum is the chief client-side designer. He built the most complex Treesaver grids yet and with Filipe integrated them to the platform. Thomas Graft and Nick Jenson coded the native app—and in record time. Scott MacNeill designed all those tables, more than once, and beautifully. The fonts, naturally, come from Webtype.

Great credit belongs to the client, Sporting News, led by Jeff Price, an old-school publisher who has figured out where things are going. The marketing effort is led Geoff Shaw, supported by the astonishingly energetic project manager, Shaun Koiner. Dan Koch ran the tech side with remarkable skill and calmness; he integrated Treesaver into the CMS seemingly overnight.

Garry Howard is the very fine editor. His visual cohorts, Keith Wood, creative director, and Lee Owens, art director, guided the design so that it would work with the brand.

I’ve seldom worked with a smarter or faster team.

With the launch of The Sporting News, Treesaver puts real meaning into the phrase,  “Create once, publish everywhere.”

Next entry: Earth and Œŧħ